Note: Since the installation of the library scmutils requires the root access of your Linux system, please do NOT use it on your working computer. Instead, create an isolated virtual machine to use it.

2. Go to the bottom of this post to click the category scmutils, so that you can see all the posts in this scmutils series.

In the following, if you need to copy any commands or programming codes, remember that any number on the left of the vertical green line is NOT part of the code.

to further extract the file.

Then two folders will be created: bin and scmutils.

to go into the folder.

You will see a file called mechanics.

8.2 Instead, you should run the command

to specify that the file mechanics is actually in the current folder.

It is because your Linux system has not the program xterm yet.

8.3 Run the following command to install it.

There will be an xterm window popup, but with an error message inside:

That means you should move the two folders, bin and scmutils, to the pre-defined locations.

9.1 Run the command to move the folder scmutils to its pre-defined location:

10.2 Move its content to the pre-defined location by this command:

However, in practice, it is difficult, because it provides no syntax-highlighting. Also, you cannot use mouse in the Edwin window, so if you want to copy and paste a command or a series of commands, there will be no obvious way to achieve that.

So I suggest you to use the standard Emacs as the editor instead.

12.2 Also, learn how to open Emacs’ initialization file, which has the filename

After opening the file, you will see that it is just a text file.

12.5 Within Emacs, type the command

M-x means that while the Alt key is pressed down, press also x. Then type the word mechanics. 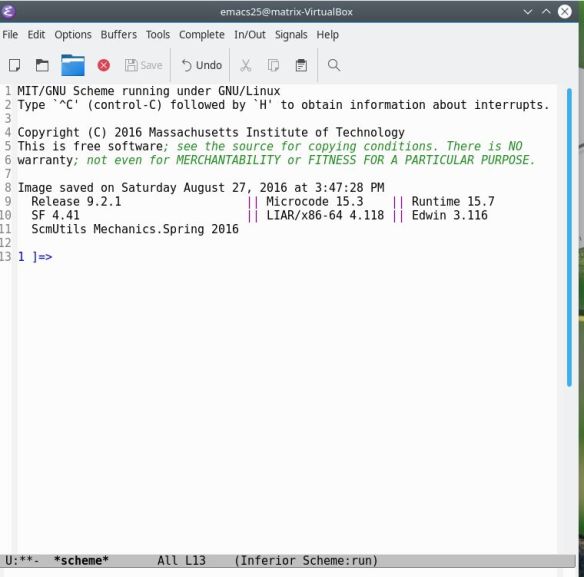 to test the system.

13. If you want to access your last command without re-typing it, type the command