I recommend this video.

Approximately speaking, mathematics is whatever language with the maximum precision.

Life is a process of self de-centralization. If you do not follow that path. You feel unhappy.

Ask HN: Why is nearing completion so demotivating?

534 points by danschumann 3 months ago

So I’ve been working on animation software for over two years. Part of me is very excited for launch so I can have money again (I’ve been freelancing a minimum amount these last two years, and went car-less, moved, cut lifestyle into a third). I should be wholeheartedly excited, but I’m feeling tired and generally sluggish regarding the project. I still make consistent progress, but it takes a lot of will power.

Part of me thinks it might be an aversion to sales. Part of me thinks this could have been built up so much in my head that anything short of overnight millions would be a disappointment (though I would be happy with 1500 bucks a month), part of me thinks I might be scared of success (or scared of surpassing my parents) (media attention), part of me fears the attacks that might come with success (having something to lose), part of it is the un-fun-ness of mature projects where the focus is on polish and bugs rather than broad new features, and part of me is scared of commitment: if I succeed I have to stick with this (freedom value), part of me wonders what will happen when more people become involved, if I will be able to maintain my creative direction, since I’m scratching my own itch. Part of me wonders if diet and exercise isn’t a factor.

When your project is finished, the dream is dead and the reality is born. The death of a dream is like the death of a friend. It’s probably been with you for a long time — longer even than the length of the project. A dream is the manifestation of what’s possible. When it is over, the possible diminishes very quickly and you are left with what actually is. Will people respond well to your project — in the dream stage it is possible; everything is possible. In the reality stage, it will only be what it is.

So while it’s common to think of a release as a birth of something new, realise that you also have a significant loss. You will mourn that loss. Give yourself some emotional space to deal with the mourning.

This is exactly it. Tens of my personal projects have died in this stage. It was always much easier to move on to the next dream. There is always the next big problem that could use a solution. Why not build when it is what we do best? Rinse, repeat.

I took a break from side projects for several years but recently got back to it and couple weeks back finished building. It is the same story all over again. Same feeling. I’m dreading what comes next.

— Why is nearing completion so demotivating?

(a) Consider the left NS’ sector. Write the precise mass-squared formula with normal-ordered oscillators and the appropriate normal-ordering constant. 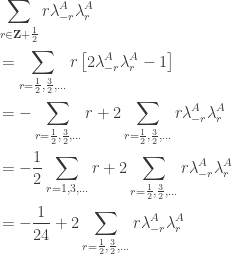