The wikipedia page “Fundamental polygon”, specifically the subsection entitled “group generators”, has a serious mathematical error. You cannot derive a presentation for the fundamental group from the fundamental polygon using the side labels in the manner described on that page (and which you have copied), unless all of the vertices of the polygon are identified to the same point. In the picture you provided and which can be seen on that page, one opposite pair of vertices of the square is identified to one point on the sphere, the other opposite pair of vertices is identified to a different point on the sphere.

There is still a way to derive a presentation for the fundamental group from a fundamental polygon, but it is not the way described on the wikipedia page. In the sphere example of your question, you have to ignore one of the two letters

, keeping only the other letter. For example, ignoring

, you get a presentation

That’s backward: in your example, the sphere is the quotient space of the fundamental polygon, not the other way around. – Lee Mosher Jul 23 ’14 at 17:30

(a) Consider a circle

, presented as the real line with the identification

as the fundamental domain. The circle is the space

is defined by imposing the (so-called)

. Describe the action of this identification on the circle. Show that there are two points on the circle that are left fixed by the

action. Find a fundamental domain for the two identifications. Describe the orbifold

on the positions that they can form a horizontal diameter.

Then the action is a reflection of the lower semi-circle through the horizontal diameter to the upper semi-circle.

are the two fixed points.

A possible fundamental domain is

If a variable point

moves from 0 to 1 and then keeps going, that point will actually go back and forth between 0 and 1.

A matrix L that satisfies (2.46) is a Lorentz transformation. Show the following.

is a Lorentz transformation so is the inverse matrix

is a Lorentz transformation so is the transpose matrix

(b) Show that the objects

transform under Lorentz transformations in the same way as the

considered in (a) do. Thus, partial derivatives with respect to conventional upper-index coordinates

Using the Kronecker Delta and Einstein summation notation, we have

One defines (as a matter of notation),

and may in this notation write

Now for a subtlety. The implied summation on the right hand side of

is running over a row index of the matrix representing

. Thus, in terms of matrices, this transformation should be thought of as the inverse transpose of

acting on the column vector

. That is, in pure matrix notation,

as a function of

‘s are related by Lorentz transform,

is also a function of

For notational simplicity, we write

is a function of

‘s, we can differentiate it with respect to 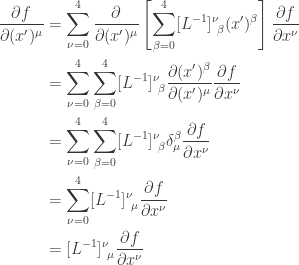 It is the same as the Lorentz transform for covariant vectors:

The two cases can be grouped into one, by replacing the right hand sides with the Kronecker delta. However, there are 4 possible forms and I am not sure which one should be used.

So I do a little research on Kronecker delta in this post.

The inverse Lorentz transformation should satisfy

is the Kronecker delta. Then, multiply by the inverse on both sides of Eq. 4 to find

is also written as

means sum over the index

which lives in the primed frame, leaving unprimed indices

(so that the RHS of Eq. 6 is unprimed as it should be), where the sum is over a row of

and a column of

which is precisely the operation of matrix multiplication.

This one is WRONG:

This one is RIGHT:

2. [Kronecker delta] is invariant in all coordinate systems, and hence it is an isotropic tensor.

3. Covariant, contravariant and mixed type of this tensor are the same, that is

Raising and then lowering the same index (or conversely) are inverse operations, which is reflected in the covariant and contravariant metric tensors being inverse to each other:

is the Kronecker delta or identity matrix. Since there are different choices of metric with different metric signatures (signs along the diagonal elements, i.e. tensor components with equal indices), the name and signature is usually indicated to prevent confusion.

— Wikipedia on Raising and lowering indices

are both 1-covariant 2-contravariant coordinates of T. The only difference between them is the notation used for sub- and superscripts;

are both 1-contravariant 2-covariant coordinates of T. The only difference between them is the notation used for sub- and superscripts.

Rather, the dual basis one-forms are defined by imposing the following
16 requirements at each spacetime point:

is the Kronecker delta,

otherwise, with the same values for each spacetime point. (We must always distinguish subscripts from superscripts; the Kronecker delta always has one of each.)

is a tensor, we can raise or lower its indices using the metric tensor in the usual way. That is, we can get a version of

with both indices raised or lowered, as follows:

are the upper and lower versions of the metric tensor. However, they can’t really be considered versions of the Kronecker delta any more, as they don’t necessarily satisfy [0 when

]. In other words, the only version of

that is both a Kronecker delta and a tensor is the version with one upper and one lower index:

— Kronecker Delta as a tensor

Continue the calculation for the Problem 2.3b:

Using the Kronecker Delta and Einstein summation notation, we have

. Then the question is simplified to

Since the spacetime interval is Lorentz-invariant,

. So the left hand side can be replaced by

Note that the 4 terms on the left side also appear on the right hand side.

Since this equation is true for any coordinates, it is an identity. By comparing coefficients, we have:

Prove that a metric tensor is symmetric.

. Because it’s irrelevant what letter we use for our indices,

So only the symmetric part of

would survive the sum. As such we may as well take

to be symmetric in its definition.

— Why is the metric tensor symmetric?

we cannot cancel out

on both sides. In other words, we do NOT assume that

in the first place.

would survive the sum” means that only the sum

(b) Show that the objects

transform under Lorentz transformations in the same way as the

considered in (a) do. Thus, partial derivatives with respect to conventional upper-index coordinates

In matrix form, covariant vectors are represented by row vectors:

Now we lower the indices in order to find the Lorentz transformation for the covariant components:

(a) Give the Lorentz transformations for the components

of a vector under a boost along the 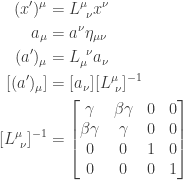 Another method is to start with:

(c) A boost with velocity parameter

(b) A rotation with angle

(a) A boost with velocity parameter

The matrix is its own inverse.

Apply the result to the original transformation:

(b) Explain the meaning of the unit K (degree kelvin) used for measuring temperatures, and explain its relation to the basic length, mass, and time units.

is the internal energy.
.

In other words, the Boltzmann constant

to the language of energy unit

However, although the temperature unit

and the energy unit

would not give the correct value of energy

, not to mention that we have not yet specified of which the energy

For an ideal gas,

and the average translational kinetic energy is

In other words, just the value of

itself gives no physical meaning. Instead,

can be interpreted as the average translational kinetic energy of the particles in an one dimensional space. Equivalently,

gives that in our three dimensional space.

We define the temperature unit Kelvin

Once this value is fixed, the Boltzmann constant

value can be estimated by using, for example, the ideal gas law

Construct and evaluate a dimensionless number using the charge

of the electron (as defined in Gaussian system of units),

. (In Heaviside-Lorentz units, the Gaussian

are transverse coordinate indices, neither of them can be zero.

is a parameterized closed curve in spacetime. The orientation of a string is the direction of the increasing

(b) Used the closed string oscillator expansion (13.24) to calculate

In the mathematical disciplines of topology, geometry, and geometric group theory, an orbifold (for “orbit-manifold”) is a generalization of a manifold. It is a topological space (called the underlying space) with an orbifold structure.

The underlying space locally looks like the quotient space of a Euclidean space under the linear action of a finite group.

In string theory, the word “orbifold” has a slightly new meaning. For mathematicians, an orbifold is a generalization of the notion of manifold that allows the presence of the points whose neighborhood is diffeomorphic to a quotient of

. In physics, the notion of an orbifold usually describes an object that can be globally written as an orbit space

is a manifold (or a theory), and

is a group of its isometries (or symmetries) — not necessarily all of them. In string theory, these symmetries do not have to have a geometric interpretation.

In mathematics, a manifold is a topological space that locally resembles Euclidean space near each point. More precisely, each point of an

(a) For an O23-plane the two normal directions

can be represented by a plane. A closed string at a fixed

appears as a parameterized closed curve

in this plane. Draw such an oriented closed string that lies fully in the first quadrant of the

This one is wrong.

Recall that a group is a set which is closed under an associative multiplication; it contains an identity element, and each element has a multiplicative inverse. Verify that

, as described above, are groups.

A group is a set, G, together with an operation

(called the group law of G) that combines any two elements a and b to form another element, denoted

. To qualify as a group, the set and operation,

, must satisfy four requirements known as the group axioms:

For all a, b in G, the result of the operation,

There exists an element e in G such that, for every element a in G, the equation

holds. Such an element is unique, and thus one speaks of the identity element.

For each a in G, there exists an element b in G, commonly denoted

, where e is the identity element.

The axioms for a group are short and natural… Yet somehow hidden behind these axioms is the monster simple group, a huge and extraordinary mathematical object, which appears to rely on numerous bizarre coincidences to exist. The axioms for groups give no obvious hint that anything like this exists.

— Richard Borcherds in Mathematicians: An Outer View of the Inner World