While DOLIST and DOTIMES are convenient and easy to use, they aren’t flexible enough to use for all loops. For instance, what if you want to step multiple variables in parallel?

Implement the function split-if without using the macro do. 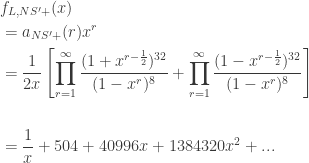 So the total number of states in heterotic string theory at

The more common view regarding quantum logic, however, is that it provides a formalism for relating observables, system preparation filters and states.

In this view, the quantum logic approach resembles more closely the C*-algebraic approach to quantum mechanics. The similarities of the quantum logic formalism to a system of deductive logic may then be regarded more as a curiosity than as a fact of fundamental philosophical importance. A more modern approach to the structure of quantum logic is to assume that it is a diagram – in the sense of category theory – of classical logics (see David Edwards).

If (member o l) finds o in the list l, it also returns the cdr of l beginning with o. This return value can be used, for example, to test for duplication. If o is duplicated in l, then it will also be found in the cdr of the list returned by member. This idiom is embodied in the next utility, duplicate:

Without using the existing function member, define duplicate as in

“Keep only states with

The source of the macroscopic time asymmetry, aka the second law of thermodynamics, is the difference of prediction and retrodiction.

In a prediction, the deduction direction is the same as the physical/observer time direction.

In a retrodiction, the deduction direction is opposite to the physical/observer time direction.

If a retrodiction is done by a time-opposite observer, he will see the entropy increasing. For him, he is really doing a prediction.

The existence of the so-called “the paradox of the arrow of time” is fundamentally due to the fact that some people insist that physics is about an observer-independent objective truth of reality.

However, it is not the case. Physics is not about “objective” reality.  Instead, physics is always about what an observer would observe.

The road to hell is paved with good intentions.

Common Lisp provides a spectrum of predicates for testing for equality of two objects: eq (the most specific), eql, equal, and equalp (the most general).

eq and equal have the meanings traditional in Lisp.

If two objects satisfy any one of these equality predicates, then they also satisfy all those that are more general.

The predicate eql is the same as eq, except that if the arguments are characters or numbers of the same type then their values are compared. Thus eql tells whether two objects are conceptually the same, whereas eq tells whether two objects are implementationally identical. It is for this reason that eql, not eq, is the default comparison predicate for the sequence functions defined in chapter 14.

The equal predicate is true if its arguments are structurally similar (isomorphic) objects. A rough rule of thumb is that two objects are equal if and only if their printed representations are the same.

Two objects are equalp if they are equal; if they are characters and satisfy char-equal, which ignores alphabetic case and certain other attributes of characters; if they are numbers and have the same numerical value, even if they are of different types; or if they have components that are all equalp.

1. Use eq to compare symbols

2. Use equal for everything else

“The left NS’ sector is built with oscillators

acting on the vacuum

So all the states with integer

According to special relativity, in EPR, which of Alice and Bob collapses the wavefunction is not absolute. In other words, they do not have any causal relations.

The generating function is an infinite product:

To evaluate the infinite product, you can use SageMath with the following commands:

an observer ~ a consistent history

Set your course by the stars, not by the lights of every passing ship.